Since we don’t have anything to do, or to watch, I reviewed the financial reports of 2018/19 and summarized some points for your reference, especially when discussing a potential transfer… 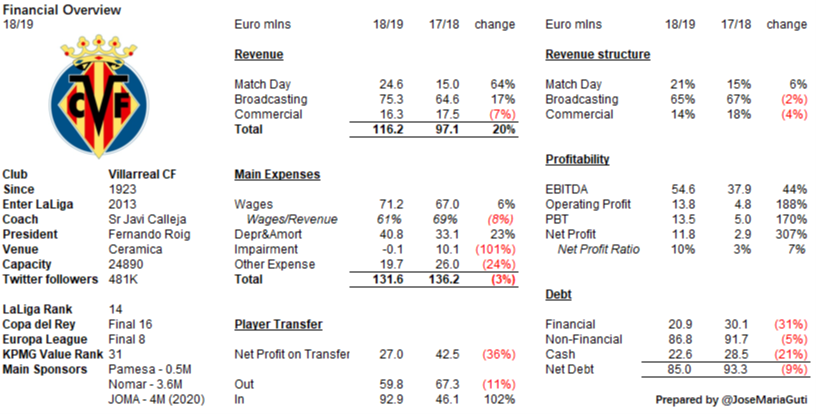 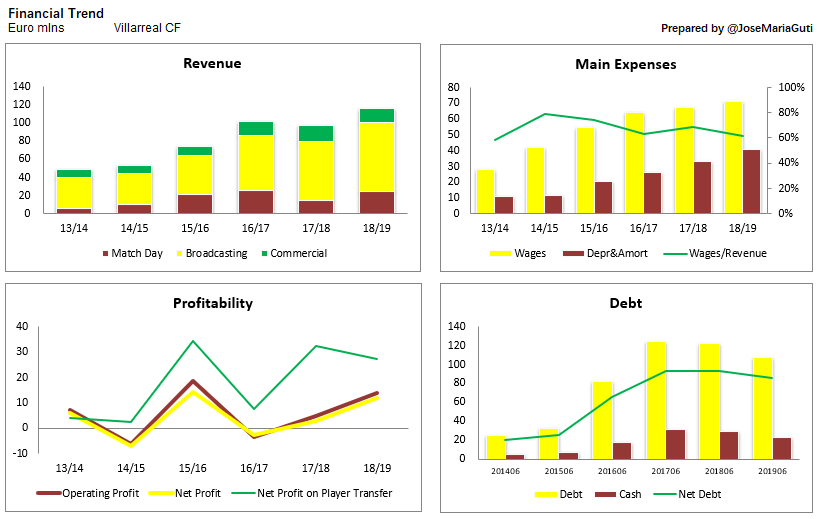 Overall, comparing to the previous season, the revenue of 2018/19 was increased by 20% and reached a record high of €116.2 million. At the same time, expenses were under control, thus profitability was improved. Financial liabilities decreased by 31%, so did net debt by 9%. All figures point to a successful season, but is it? 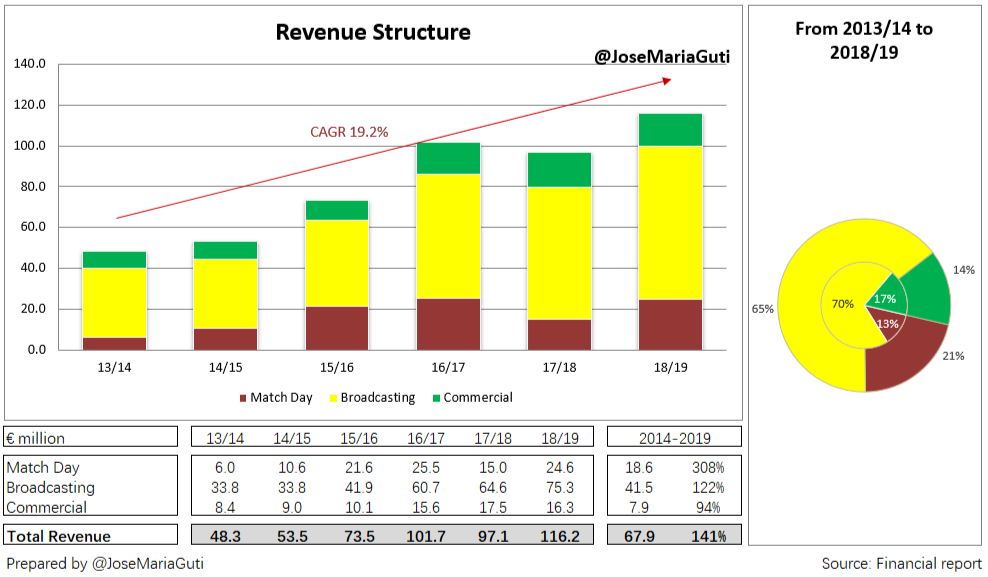 The revenue was divided into the following categories in the report: Match day (competition prize and membership), Broadcasting and Commercial. Compared to the previous season, income from matches and competition increased by 64% and broadcasting income increased by 17%. However, commercial income was down by 7%, which was the first time since season 2013/14. In terms of proportion, revenue structure didn’t change much. But compared to season 13/14, the trend shows that match day and commercial was increased while broadcasting decreased although still most important.

First, let’s look into match day income. The table above categorized these incomes by each competition. During the season of 2018/19, Villarreal competed in La Liga, La Copa, and Europa League. It’s obvious that income from UEFA contributed the most in this category. The UEFA income increased 88.5% for 18/19 because the team reached quarter final, which was the best record since 15/16, and more importantly, the new UEFA prize distribution plan came into effective right from this season.

Next is broadcasting, which was improved by 17% compared to the previous season. 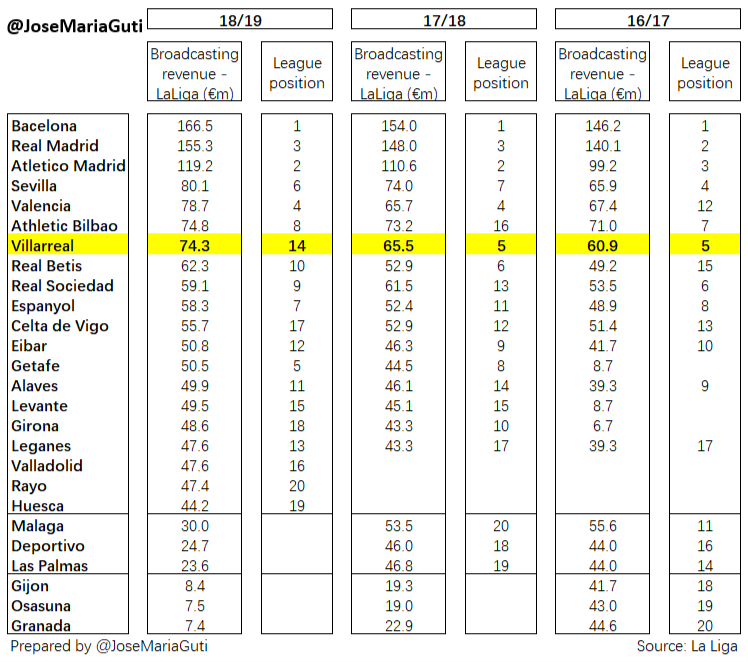 According to the data published by La Liga, the broadcasting fee from domestic matches was €74.3 million, ranked 7th in the league. The table above illustrates the La Liga broadcasting income and league rank for all 20 top league clubs and 6 relegated clubs in the last three seasons. The amount is calculated in consideration of the recent 3 seasons, so the weak performance of 18/19 would affect the income in the next two seasons. However, season 18/19 is the final year of the current La Liga broadcasting package, the new package would compensate the impact of decline in the league table, while the unexpected league suspension in 2020 would.be another thing to consider.

Compared to the competition prize, the UEFA broadcasting income was less significant, unless the club could make a difference in Champions League (best wishes).

The last category of the revenue is commercial, including sponsorship income, commodity sales, commercials. For Villareal, the main sponsors include PAMESA Ceramica (and other Roig’s business), JOMA (extended to season 20/21), Coca Cola and San Miguel. The amount of sponsorship was not disclosed. It’s reported that JOMA’s deal was €4 million a year, and the annual report showed that PAMESA and Normar Patrimonial contributed 0.5m and 3.6m in 18/19. The commercial income changed little since 15/16, when JOMA was introduced to replace XStep. Thus, other than kit sponsor, the club seems hand tighten in commercialization. Of course, it’s not easy for a club located in a city with 50,000 residents, and the financial result seems ok now. But still, with more exposure in domestic and UEFA competition, Sr Roig should find a way to bring extra money and reduce related party transaction to avoid any incompliance risk.

From revenue to net profit, despite the revenue was increased 20%, the net profit boosted by 307%. What’s in between? 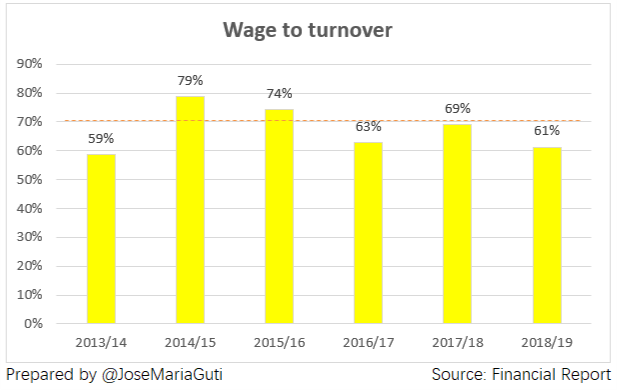 We all know that, the greatest portion of expenditure of a football club is personnel expense. Thus, to avoid potential financial failure, La Liga developed a guideline of wage to turnover ratio at 70% for all clubs. Compared to that, Villarreal have managed well since 16/17, and lower the ratio from 69% to 61% in 18/19.

When looking into the detailed personnel expenses, we could find out that the decrease was not achieved by salary reduction. Increase in revenue did.

Personnel expenses increased by 4.2m, including 2.7m of salaries and wages and 1.2m of bonuses. Although the club sent out several important players including Rodri, Castillejo, Sansone and Roberto Soriano, this salary increased instead due to frequent change of players and coaches in that dangerous season. 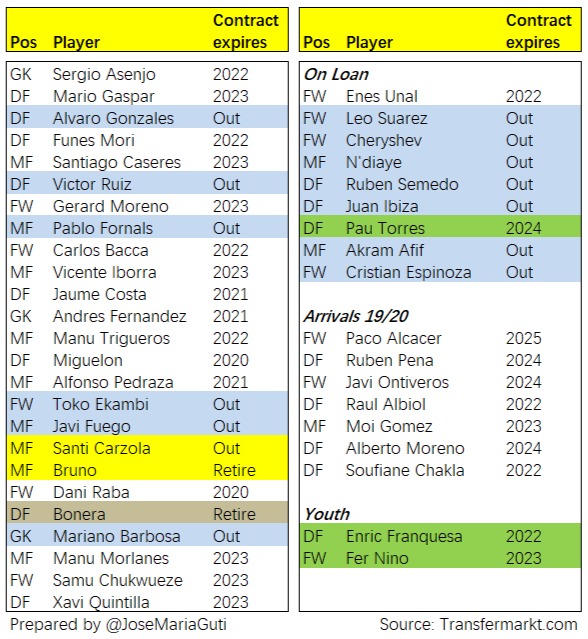 Past is past. For season 19/20, we anticipate no significant change of the amount as a result of departures of two CBs and Fornals, and arrivals of Paco and Albiol. But for 20/21, we have waved goodbye to two legends and noticed that no player needs a contract renewal for the upcoming season. In another word, the club may have enough budget for signing of big names in this summer (except Unai).

Having analyzed the highest expenditure on the Profit or Loss, we compared other expenditures from year to year. Nothing significant was noted, except that other operating expense was decreased by 24% which was offset by increase of amortization of player registration. Plus, the net profit of player transfer declined by 16%. Thus, let’s review the impact of player transfer on profit before tax (PBT). 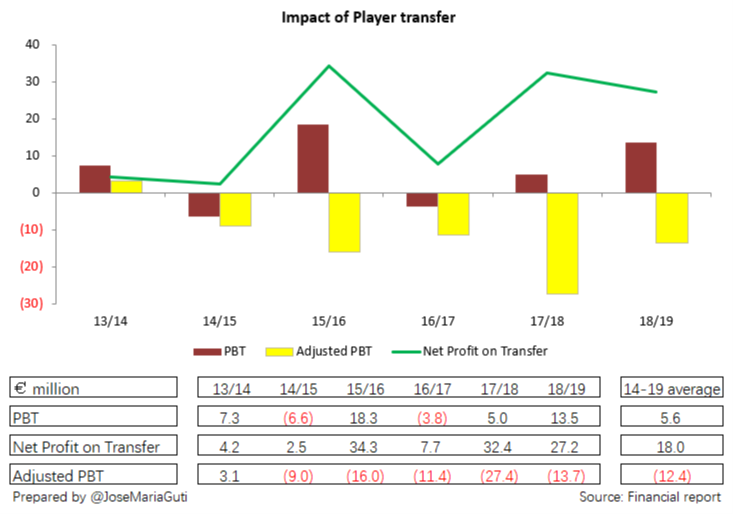 The club earned a profit for 4 years in the last 6 years with an average PBT of 5.6m. Also, the club had made a profit for player transfer in each season, with an average profit of 18.0m. That is to say, without the profit from transfer market, the club would have made a loss on the book of 12.4m each year. Of course, that could be a strategy to make a profit, that is to sell one key player each year (Gabriel, Vietto, Baily, Bakambu, Castillejo and Fornals) without damage to the squad. But this summer, the management should be careful that, without Bruno and Santi, the squad might be vulnerable than ever. 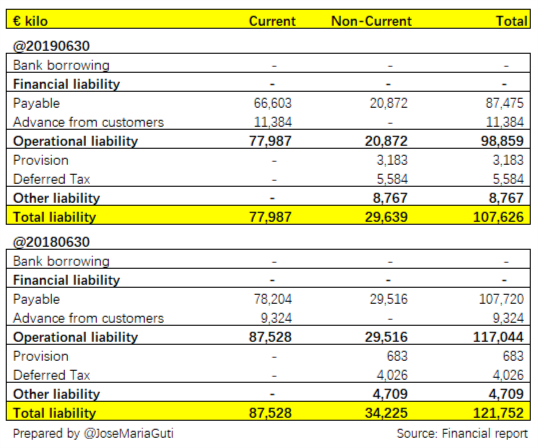 The club generally thrive from internal growth, which is more obvious from debt structure. No bank borrowing was obtained by the club, which is not very common among La Liga clubs. The financial cost on P/L was reported derived from debt to third parties, but the amount was insignificant. The non-financial liability comprised of payable to other clubs, facility providers and employees, etc. Is there any default risk? 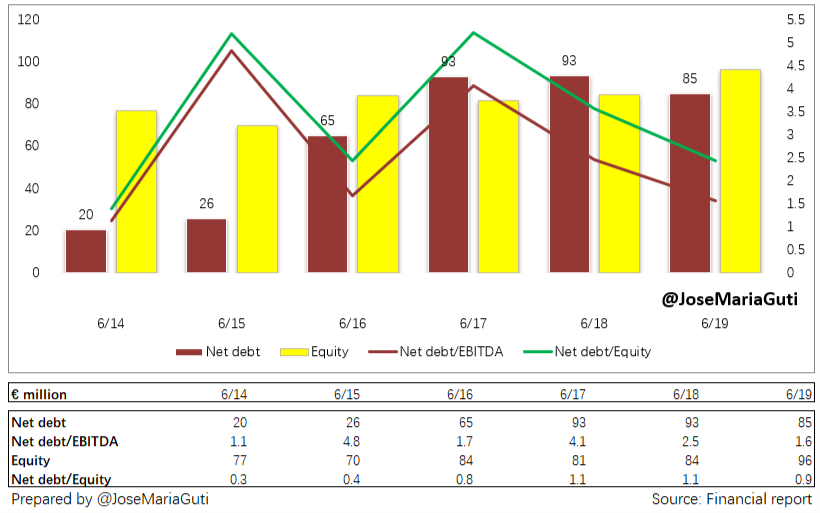 Let’s put cash and bank balances into consideration. The chart above illustrated the change of club’s net debt in last 6 years. Although the absolute amount and relative ratio to EBITDA and Equity bumped in the 6 years, both ratios were managed close to club’s capability and resources.

Kind of a conclusion –

This is my first time to review the financial report of Villarreal. With limited knowledge and information of the club, I can only conclude that: 1) Broadcasting was and still will be the most important and stable source of income; 2) There’s room for big signings this summer, meanwhile the need for profitability might enforce us to wave goodbye to someone beloved; 3) Liquidity was not an issue at least for season 18/19, while the impact of COVID-19 added uncertainty to the financial position and plan.

Thank you for your reading. Any advice or comment will be welcomed. Endavant!