TV rights in La Liga compared to the EPL

Would La Liga become more competitive at the top if an EPL-type TV rights distribution system was allocated? The answer might not be what you think.

Share All sharing options for: TV rights in La Liga compared to the EPL

There was an interesting chart published last week showing how La Liga clubs would fare if a Premier League-type TV rights distribution system was implemented in Spain, shown below: 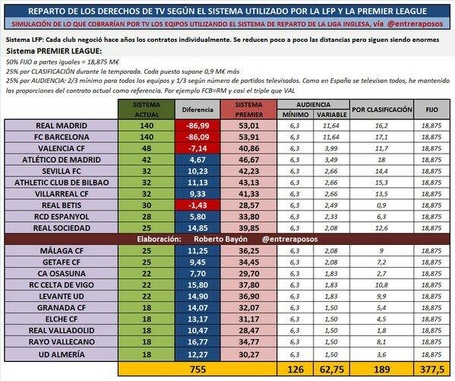 EPL TV revenues are divided with half divided equally among the clubs, 25% allocated based on last year's league position, and 25% based on TV appearances (since all matches are televised in Spain, they were allocated part equally and part based on fanbase estimates).

The obvious point: chances of this happening are minimal, since only two clubs would be disadvantaged by this and their names are Real Madrid and Barcelona.

The only other clubs who would 'lose money' under an EPL system are Betis (and that is entirely because of their last-place finish in La Liga) and Valencia.  The effect for them is only 5-10% and is partly due to league position as well.

Although much of the impetus for a more equitable distribution of TV rights has come from clubs such as Sevilla and Villarreal, it's interesting that the real winners in this system would be many of the smaller clubs, from Elche on down.  These teams would see their TV revenues increase by over 50%--and since their matchday revenues and sponsorship deals are small, this would be important.

As for clubs such as Sevilla, Atletico, Athletic Club and Villarreal, they would see another €10m or so (remember, Atleti's number reflects them winning the league this season, unlikely to happen every year) which is helpful and might enable another quality signing in the summer, but isn't likely to be all that important.

The real problem with this system, in the eyes of the Spanish football authorities, is that marketing of La Liga as "the best league in the world" has centered almost entirely on the successes of Real Madrid and Barcelona in Europe.  A more equitable TV rights distribution in Spain wouldn't change the playing field within Spain all that much, really; but what it would do is significantly lessen the advantage Barcelona and Real Madrid over their European rivals.  Not going to happen!