The morning after: "A worthy farewell to the dream"

Share All sharing options for: The morning after: "A worthy farewell to the dream" 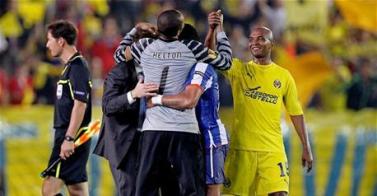 Good morning groguets! Last night was ultimately disappointing, of course, but also satisfying in the quality of Villarreal's play, the atmosphere in the stadium, and the result on the evening.

The Spanish papers are full of praise for the Submarine, with AS.com capturing the general tone with the headline "a worthy farewell to the dream". Cani was their pick as 'dandy' of the match, and judging from our poll results so far, most everyone agrees. EPM writes "nobody invited the bad luck" but is full of praise for Villarreal's control of the match, unfortunately not reflected in the final scoreline.

Sr. Roig commented that the team and fans deserved a "10" last night, and he and the players both came out after the game and thanked the fans for their support. The next task is the trip to Mallorca, and our Chairman has found a "prior commitment" that enables him to avoid the islanders' hospitality, much less the presidents' dinner the night before the match! A wise decision.

Meanwhile, Mallorca apparently isn't interested in providing any tickets to Villarreal supporters (not that I think many wan to travel there for a Sunday noon kickoff) but is offering tickets for 3 to 5 Euros to try to fill the stadium. Pierre Webó trots out the party line that Mallorca should have been in the Europa League. Does anyone seriously think Mallorca would have made it out of the group round (they would not have been seeded as highly as Villarreal, remember)?

Returning to last night, the one note of discord was hit by Porto coach Villas Boas, who complained that Garrido had 'failed to respect Porto'. This apparently had to do with the whole referee-in-the-restaurant thing Marca had reported, which has since been contradicted.

Apparently the Porto coach gave his remarks first and when Garrido spoke, he tried to smooth things over, saying he hadn't said he report was true,only that if it was there were questions to answer. Garrido congratulated Porto ('an excellent team') but took pride in Villarreal's efforts and felt, as we all did, the two teams were closer in quality than the final scoreline indicated.

We won't know the final amount until the market pool is allocated, but EPM reports Villarreal should earn around 6 million Euros from their Europa League efforts. I actually think that may be a bit low since there were not as many Spanish teams in the later rounds. Nothing compared to the guaranteed money in the Champions League, but not chump change either!

Finally, as some of you may have seen on the game thread, folks watching the match in English on Gol TV in the US heard Ray Hudson praise Villarreal, but also this website, saying something to the effect that American soccer fans looking for a La Liga team to follow, Villarreal is a great choice, and there's this great website VillarrealUSA.com devoted to them! That was terrific to hear. Thanks, Ray!

I mention this because VillarrealUSA.com isn't simply the three blog managers. It's all of you. We thank all of you for your comments, fanposts, fanshots, everything. Keep posting, keep commenting, and keep spreading the Villarreal word. I think we all saw last night Villarreal CF deserves no less.

And if you visit the site and like what you see, become a member and join us!! Endavant Villarreal!!