A big night ahead in Vila-real

Share All sharing options for: A big night ahead in Vila-real

A few snippets of interest from the papers and around the internet....The usual stuff on the Twente side--Coach Prud'homme says Villarreal is like Barça, and Bryan Ruiz says Villarreal have to be favorites in the tie. Garrido is having none of this, he's been showing the squad videos of Twente to remind everyone what we're up against.

And although the call for the match is the same as on Sunday, it's expected Capdevila will come in at left back, and probably Nilmar will start for Ruben. But does Marchena or Borja partner Bruno in midfield?

They certainly will appreciate the weather, it's supposed to be around 18C at game time.

Joan Capdevila says he would like to win a title, and compares Santi Cazorla to bread...(Joan, if Santi's the bread, then you're the jamón!) 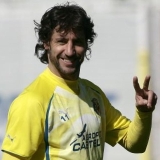 Just so you know, calling someone a "pedazo de pan" is a good thing--means a close, kind-hearted friend.

And finally, I guess the Spanish referee's performance yesterday in the Chelsea-Manchester United CL tie was not without controversy. Hey Carlo, he's one of our best!! We'll send you Borbalan next time!!!

I'll leave you with a tweet just come in from our injured defender, Ángel.