For the first time in the Europa League knockout rounds this year, Villarreal plays host to the first leg of the tie, welcoming FC Twente to El Madrigal.  The Tukkers won the Dutch league last year and defeated PSV Eindhoven last week to move to the top of the league again.  The Dutch league isn't as highly rated as the Bundesliga, Serie A, or La Liga, so it might be tempting to think of FC Twente as a less accomplished Leverkusen.  But that would be to take them too lightly--they are a fine team with lots of power and speed, and will not be a pushover--not with finishing like this:

Last year Twente participated in the Europa League and lost to Werder Bremen in the round-of-32 stage.  This year as Dutch champions they started out in the Champions League, but finished third in their group behind Inter and Tottenham.  Parachuted into the Europa League, they have eliminated two Russian teams in the knockout rounds, Zenit St. Petersburg and Rubin Kazan.  That's impressive, even though the Russian teams are just beginning their domestic season.  And given that they are now leading the Eredivisie, everyone expects this to be a tight matchup, with no clear-cut favorite.

Villarreal have never played Twente; they did meet Dutch opposition last year in the Europa League qualifying round (NAC Breda) and won easily.  But going back to 2005, AZ Alkmaar came to El Madrigal in the quarterfinals of the UEFA Cup and posted a 2-1 victory, ultimately knocking the Submarine out of that competition.  One of the goalscorers on that evening was current Twente midfielder Denny Landzaat--I hope that's not an omen for this matchup.

Twente Coach Michel Preud'homme generally puts out a 4-3-3 in front of Bulgarian keeper Mihaylov.  It's quite a United Nations in the rear, with Dutchman Wisgerhof, Venezuelan Rosales and Brazilian Douglas now being joined by American Onguchi Onyewu, on loan from Milan.

In midfield, Belgian/Moroccan winger Nacer Chadli and Dutch international Theo Janssen are men to watch.  Janssen is renowned for his free-kick taking ability, and between the two they've contributed seventeen goals in the Eredivisie this year.  Landzaat often plays in Europa games as a holding midfielder, so I'd expect to see him here.

Up front, Twente has an emerging talent in Luuk De Jong.  Only 20, he's scored 10 goals in the league.  Liverpool has allegedly been interested in him, as well as in strike partner Costa Rican Bryan Ruiz, who has eight goals this season.

But the team's top scorer is Marc Janko, a 27-year old Austrian who joined Twente from Red Bull Salzburg this season.  He gave Gonzalo a tough time (and scored the first goal)  when we played in Salzburg last year, a game which had to be one of the low points of the Valverde regime..  We'll have to watch out for him again.  Both Janko and Ruiz have recently returned from injury, but are expected to be in the lineup tomorrow.

I usually think it's an advantage to have the first leg on the road, but Nilmar feels the other way about this one.  Certainly Villarreal would like to score some goals and come away with a victory to take to Holland next week. 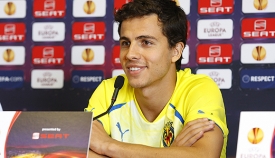 The keys in this first leg are likely to be how well Villarreal can break down what on paper doesn't look like a tremendously strong defense, and whether our strikers are back on form after an uncharacteristic lapse against Barcelona.  Defensively, Ruiz might be the greatest danger, but in general we need to watch out for quick counterattacks from the Tukkers.

And then there's our bugaboo--set pieces, which can offer Twente some excellent opportunities to score, especially with Janko's aerial threat on corners.

Villarreal has bounced back strong in Europe this year in games played after weekend disappointments, so I wouldn't expect any lasting effects from the loss on Sunday.

The major question for Garrido is whether to partner Marchena with Bruno, playing more of a diamond with Cazorla and Borja on the wings, or put Borja in the middle and bring Cani into the lineup.   From the team selection for tomorrow, it appears maybe it will be Marchena in the middle again.

Let's hope Rossi and Nilmar are on form--we need to produce an outstanding performance tomorrow.  And a little luck, of the sort we had against Leverkusen but have been missing in La Liga of late, would help too.

If Villarreal can come out of this leg with a two-goal advantage (especially if Twente is held scoreless) I think the Submarine can probably defend that in the return match.  It's a tough ask, but we can do it.  Endavant Villarreal!!