Is third time the charm for the yellow submarine?
Europa League 2011 Semifinals

FC Porto vs. Villarreal CF is the most intriguing of the 4 semifinals in the European club championships this year. It is a clash of styles of epic proportions and these two teams are shoe-ins for next year’s Champions League. Porto is aiming for a treble, already secured the Portuguese League and reached the final of the Cup (Taça de Portugal).
Both teams have thumped their rivals in the quarter-finals. Porto dispatched Spartak Moscow 10-3 on aggregate and Villarreal thumping FC Twente 8-2 on aggregate. Most fans and experts believe that the winner of this tie is the favorite to win it all in Dublin on the 18th of May.
Let us look at the teams.

FC Porto
(disclosure: I have only watched one game of Porto live, Benfica-Porto which was a bit of an anti-climax and ugly. So most of this is based on reading the match reports from various sources across the net)

Porto under Andres Villas-Boas have been sensational. Dominated the Portuguese league right from the beginning and sewed up the title very early. They replicated the same form in Europa league, waltzing through the rounds to reach the semifinal.

Porto will line-up in a 4-3-3 with the trident of Hulk – Falcao – Varela at the top and the Guarin – Fernando – Moutinho in the middle. Falcao is usually the furthest up front and Fernando is the deepest midfielder. (see schematic)

Gaurin and Moutinho drive forward in possession to support the forwards. Hulk usually plays a bit higher up the pitch just off of Falcao on the right side sort of like 2nd striker in a 4-4-2. Varela is more the wide forward poaching at the far post or dragging the central defender off his position.
The playing style is a bit on the physical side with Guarín and Hulk among the top 20 in fouls committed department. Defensively Rolando & Otamendi are the regulars, both very steady in front of Helton. Sapunaru (who will take the place of the injure Fucile) and Perreira are fullbacks used most.

Based on some of the stats in the knockout rounds of the Europa League, Porto doesn’t dominate possession, but they are quick on the counterattack and use the size of Hulk to overpower opposing fullbacks and central defenders. Hulk is the sort of player that makes oppositions alter their usual game plan to counter his unique abilities. Moutinho plays the key role of providing the service for both Falcao and Hulk. He has a good midrange shot and is capable of a few searing runs through the middle and powerful midrange drives that Diego Lopez needs to pay attention to. Fernando is the deep midfielder and he rarely ventures into the attacking third of the pitch. The forwards of Porto take a lot of shots in general, midrange as well as from the edge of the box.

In a nutshell, they are very vertical when they have possession and defend in numbers when not in possession. (If this all sounds like Real Madrid of Mourinho in the recent clasicos, then I am with you J) 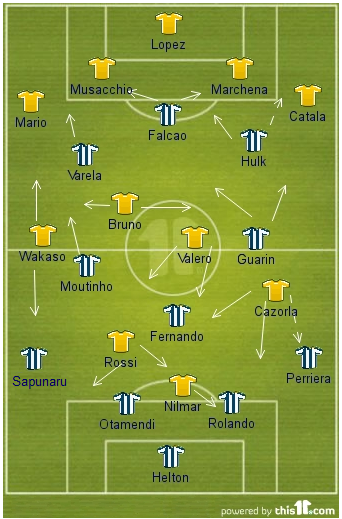 Villarreal CF
(disclosure: I’m one of the biggest fans of Villarreal J)

Villarreal had a tough time last year. Manuel Pellegrini was replaced by Ernesto Valverde and it didn’t work out. At one point Villarreal hit the bottom of the La Liga table. Around January 2010 Juan Carlos Garrido from Villarreal B took over from Valverde. After getting eliminated by Wolfsburg in 2010 Europa league, Villarreal concentrated on getting to the Europa League and finished 7th in Spanish Primera Liga. While they fell short, Mallorca’s expulsion from Europa league due to financial issues helped Villarreal to get into the Europa League.

After winning their group, they faced an impressive Napoli in the round of 32. After eking out a 0-0 in Naples and falling behind 0-1 at El Madrigal, they made a rousing comeback to win the game and the tie 2-1. They breezed past their next two opponents Bayer Leverkusen and FC Twente with four impressive wins.

Villarreal will line-up in their traditional 4-4-2 formation. It morphs into a narrow 4-2-2-2 in possession. Rossi & Nilmar lead the attack usually supported by Cazorla & Cani on the flanks and a double pivot of Borja Valero & Bruno. In the absence of the impressive captain Gonzalo Rodriguez due to a season ending injury, Marchena and Musacchio will pair in the central defence with Mario & Catala as the fullbacks. Villarreal game is centered on triangulation between Borja, Cani, Cazorla & the forwards. Both the flanks cut in naturally more often than not. Nilmar and Rossi switch constantly and Rossi at time drops back to get the ball.

How will the games play out?

Both teams will try to impose their style of play. They might make minor adjustments but I don’t see any major tactical changes.

Most of the Villarreal attacks originate from Borja and Cazorla acts as the link to Rossi & Nilmar. Both Rossi and Nilmar move a lot without the ball to open up spaces for Borja and Cazorla to push forward and typically do a screen or two to liberate one of the forwards. Wakaso, a recent signing, relies on his pace to cover a lot of area. His main role will be to keep a check on Fucile/Perreira from pushing forward and double up to help Mario to defend Varela or Hulk when he switches to the left.

Bruno is the holding pivot for Villarreal does the ‘dirty work’ defending the likes of Gaurín and Hulk when he drops deeper. 2/3rd of the attacks will come through the middle if not more. Both Nilmar & Rossi have a great first touch and are not easily dispossessed. They have very good understanding among each other and combine very well with Borja & Cazorla.

Defensively stopping Hulk will be the highest priority. This is why the younger and taller Catala gets the nod at left back over the experienced Capdevila. Marchena and Musacchio have their tasks cut and will need to have very good understanding with the fullbacks to do a tag-team job on Hulk. In the middle they will try to starve Porto midfield of the possession by short passing.

One of the reasons why Villarreal have sort of sacrificed Cani is to add some defensive muscle in the midfield. This has worked well very well in the Europa League especially against crowded midfields teams have tried to use to counter the yellow submarine. Based on what I’ve seen of the goals scored by Falcao, there were a lot of occasions where the opposition was defending Hulk with two and sometimes 3 players leaving both Varela & Falcao with a lot of space and time. This partly explains why Falcao is the highest scorer in Europa League with 11 goals. (Hulk has 4 goals).

Porto on the other hand will be more direct in its approach where Moutinho would try to feed the ball to Hulk as much as possible. If they see Villarreal doubling up to counter Hulk, they’d try to switch flanks to create mismatches and let their forwards take high percentage shots in 1-on-1 situations. Porto will definitely look at morphing into a 5-man defence which has caused a lot of grief to the yellow submarine and a lot of teams have exploited it. Bitter provincial rivals Valencia did it most. Porto might test Diego Lopez with powerful midrange drives which both Hulk & Moutinho are capable of delivering. Diego has to be careful not to be too far off the line.

One glaring advantage for Porto is the size. Villarreal is undersized in most positions as a result Gaurin-Fernando-Moutinho will be physical to muscle away Borja & Cazorla (probably the smallest player in all of Europa League) possession away. Porto might also try to push the fullbacks forward to force Cazorla and Wakaso into defending and not give them the freedom to cut-inwards where they are most dangerous. I saw a bit of this in Villarreal X Barcelona 2 weeks ago when Dani Alves did this to Cazorla. (Sapunaru/Perreira are definitely not Alves)

Porto will try to take advantage of the size in set-pieces. They will try to force fouls in the vicinity of the 18yard box to have a go at the undersized wall and the same goes with corner kicks.

While Porto has been very impressive in the Portuguese league and in general in the Europa league, they struggled against CSKA Moscow who line-up in guess what? 4-4-2. the key for Villarreal is to keep possession as much as possible in the 1st half. If they can score a goal in Dragao, it will open up the pitch for the yellow submarine to launch a few lethal counterattacks.

I trust Rossi or Nilmar to score a goal in Dragao and finish off the Dragon at El Madrigal.

If you want to argue with me or tell me that I suck - @aupasubmarino
Blog at http://centrofutbol.blogspot.com