Will Villarreal be a selling club in Summer 2011?

Share All sharing options for: Will Villarreal be a selling club in Summer 2011?

A couple of weeks ago, Villarreal CEO Fernando Roig Negueroles adamantly stated that Villarreal would not be selling its stars this coming offseason. With the likes of Giuseppe Rossi, Borja Valero, Nilmar, Santi Cazorla, Mateo Musacchio, Diego Lopez, and others being touted by the media all over Europe to be headed off to England or Italy during the summer, Villarreal is facing the possibility of losing its engine when it finally makes it back to the Champions League track next year.

Villarreal are in a bit of no-man's land when it comes to defining whether or not it is one of Europe's "big" clubs, and in turn, whether or not it is a "selling club." Coming from such a small town in a generally rural area, Villarreal does not have the universal appeal of the Barcelonas and Real Madrids of the world. As such, it is locked in, unable to move into the public's definition of a "big" club, no matter how consistent they are, or how much success they have against those bigger clubs with the massive fanbases.

As Villarreal heads towards the transfer window, still fighting for 4th place in La Liga and hoping to host the Europa League trophy on May 18th, the looming specter of the "big" clubs in Europe swooping in to purchase all of Villarreal's players threatens to pull the rug out from Juan Carlos Garrido and the Roig family. With this sort of talk hanging around, it is worthwhile to take a minute and look briefly at Villarreal's buying/selling history, as well as current squad and what it could look like next year if some of the possible transfers end up happening.

Historically, Villarreal should not be considered a "selling club." Although the club has made some prescient financial moves in the transfer market, the club does not develop players short-term to try and make a profit on the back end. That being said, reading a historical trend into the mix is a little difficult, because Villarreal has only been a top-flight club for a little over a decade.

During that time, the team has had a number of big-name players, such as Diego Forlán, Juan Roman Riquelme, Diego Godín, Juan Pablo Sorín, and Pepe Reina. While the club has sold some of those players, they generally first brought in to and played significant years here. Reina had perhaps the shortest time under Villarreal ownership, that being only a year, but he had played a couple of years with Villarreal on loan before the club purchased his rights.

Sorín was a well-traveled defender, but his two years at Villarreal just about matched his longest stint anywhere else. Villarreal wrought a number of quality years from Diego Forlán before letting him go when they were ready to, having secured Rossi's services. Had Diego Godín not stuck around for three years, one could argue that Villarreal bought his rights and then sold for a profit; realistically, though, Villarreal got great service out of him while he was here, and based on his play of late, made an excellent decision passing him on for a bunch of euros.

Admittedly, a couple of players have come and gone just to make a bit of profit, such as Martin Cáceres and Antonio Valencia. Such moves push Villarreal's reputation back towards that of a selling club, but on the whole have been aberrations. (I am happy to accept corrections on this).

Looking at the last two or three years, Villarreal has held onto its players fiercely. Rossi has been lusted after since he arrived, but Villarreal have kept him around since the summer of 2007, during which time he has become one of the best footballers in the world. Santi Cazorla just the summer before last turned down a move to Real Madrid. Diego Lopez has been rumored out each of the last two summers, but Villarreal have held onto his services. Marcos Senna stuck with Villarreal over Manchester United.

To truly understand the possibilities facing the club this summer, we have to look at who is here now, and who among our role players will likely or definitely be leaving during the summer regardless of any "big team" swoop. The current squad:

Likely to be leaving, going out on loan, or not playing with the A-team (please feel free to correct me here, too):

Under this scenario, without losing those big-name players listed in the beginning of this post, Villarreal will be at least 1 short in central defense, 1 or 2 short in central midfield, and 1 short at forward (depending on the role, if any, Hernán Pérez and Iago Falqué play with the first team.

Financially, needing to add a few players puts Villarreal in a bit of a bind. The recession continues to thrash Spain and the ceramics industry, and Villarreal continues (to the best of my knowledge) to struggle a bit with the debt that it has (although this is not a significant concern). The club should receive an influx of money from its current Europa League success, and can expect to receive at least a reasonable amount if Villarreal finishes 4th in La Liga this term and then can qualify for the group stages of the Champions League for next year.

I think that the money the club receives from this year's Europa, as well as the money the club can reasonably expect from next year's European adventure, should allow it to hang on to all of its big-name players, if the club wishes to. There is just not a huge upside in selling Borja Valero or Mateo Musacchio right now, compared with what we would be losing. Diego Lopez could fetch a nice pile of money, but he is a keeper, so only so much - and not to mention the fact that he singlehandedly has carried us through a number of matches.

The problem, as described above, is that Villarreal would be very thin without an influx of players at a couple of positions, and such an influx is unlikely if Villarreal does not consider selling anyone. That presents... 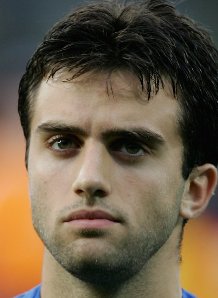 In my view, Villarreal's ultimate reality when it comes to whether or not it will be a "selling club" in Summer 2011 comes does to the issue of Giuseppe Rossi, the American-born Italian who has taken root on the Spanish coast of the Mediterranean Sea.

Damn I love Giuseppe Rossi. No way the club should let its heart and soul leave, just before it takes on another run at the Champions League. Rossi has helped carry the club to the CL positions, and he should be around to see them through at least one campaign.

Not to mention, who wants to see Rossi line up for Barcelona or Juventus or some other "big" club? Playing against him would be much worse, in my opinion, than going up against a guy like Forlán, no matter how much you like the Uruguayan. Rossi has simply meant more to the team than Forlán did.

If Villarreal were to break down and sell its biggest star, Rossi, villarrealusa.com author Allen (without endorsing the plan!) could see a deal working out somewhere along the lines of Rossi to Barca for 30m euros and Thiago (an at least somewhat central midfielder of the Senna-type). In turn, Villarreal would use that cash to pick up Kevin Grameiro as a possible replacement

Realistically, from a financial standpoint, selling Giuseppe at this high point in his career could be the club's best option, no matter how disappointing it would be to see him go. If Villarreal did pick up somewhere in the region of 30m euros for Rossi, the club would have the financial ability to replace him with an up-and-coming striker such as Grameiro

The point that has stood out this year is that we simply must shore up our defense. Putting our current back line through the Champions League ringer would simply leave us embarrassed. The first concern will be whether Ángel and Gonzalo can recover from their respective injuries and return to starter-level performance. Assuming that both players will be back, the main concern is in central defense. The current central defense includes Musacchio, Marchena, the recovering Gonzalo, and a host of other fill-ins that cannot get the job done in that position. Even if Gonzalo returns every bit of the player he has shown he can be, we must pick up a fourth natural central defender so that the club can handle the workload of competing in the Champions League at the same time as La Liga and the Copa del Rey.

So, at the end of the day, my logical side outweighs my emotional side. If the right offer comes along, I will suffer through the pain and enjoy the results of the reinvestments the club takes on.