Yellow Submarine Hosts The Blaugrana: Insights From Our Rivals

Share All sharing options for: Yellow Submarine Hosts The Blaugrana: Insights From Our Rivals

You may have heard there's a big match at El Madrigal this weekend, yes?  The only two La Liga teams with SBNation blogs devoted to them face off Saturday, and who better to ask and answer questions about the squads than the bloggers who support them.  We posed some questions to our friends at Barca Blaugranes about Barcelona, and their answers are below the jump.  To see what they asked us, and how we responded, go here.

We will be posting a full preview this evening, and running a match thread here starting a couple of hours before kickoff (4PM EDT).  Endavant Villarreal!

Who on Barca B will we see make the jump to the first team next season?  And who should we watch out for in the long run, say 3-5 years out?

Next season, expect to see Andreu Fontas, the most recent promotion due to Abidal's situation,to stay with the first team, and well as Thiago Alcantara  finally being promoted to first team status, provided Barça don't sign Cesc of course.

Personally, I would like to see 20-goal scorer Jonathan Soriano promoted too, but something tells me this is unlikely, given the lack of games better calibre players like Bojan get .

In the long run, the aforementioned players will get a chance to shine while others will hopefully join them.  Rafinha Alcantara, Thiago's younger brother, is one of them.  Although the youngster is only 18 years old, he is already tipped for a bright future.  There's also Oriol Romeu (defensive midfield), the two Marc's (Muniesa and Bartra, both defenders), Jonathan Dos Santos (midfield) and Sergi Roberto (also midfield).

At a younger level, there's Pol Busquets (a keeper), Sergi Samper who was subject to an offer from Arsene Wenger, and Gerard Deulofeu (a striker).  The future is always bright at Barcelona!

What were your impressions of the Barca-Villarreal match at Camp Nou in mid-November?  Which Villarreal players were you most (and least) impressed with?

Well, November is quite a while back, but I can still remember some things that happened in that match.  As expected it was a difficult game and Garrido prepared his team really well.  Villarreal is a team that has a very rare mix of speed, technical ability and strength and I really like that they stick to their attacking philosophy.

I was really impressed with Nilmar (seriously, what's not to like about him); he is fast, he knows how to score goals, and if he had only received more useful passes he would have caused Valdés serious problems.  Rossi also showed good movement, but just like Nilmar, he was cut off from the rest of the team.

However, I was disappointed by the left side of the defense, Joan Capdevila on the wing and his partner in the middle Mateo Musacchio.  Both of them were exposed on numerous occasions by Alves, Messi and Pedro and they will have to play much better if Villarreal intend to register a victory on Saturday. 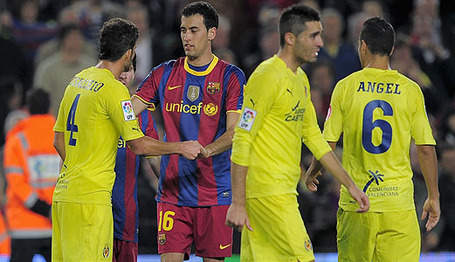 How will Barça cope with the loss of Xavi (suspended for this match)?  Villarreal fans remember last year's draw at the Nou Camp with Messi on the bench: would this year Barcelona squad have fared better?

Without a doubt.  The Ibrahimoviç signing was a historic mistake to say the least, without the notorious big game bottler this Barca side has once again proved their quality by breaking nearly all records there are to break.  The loss of Xavi is huge to the side, especially after the much-maligned international break.  The FIFA virus could still strike again, but I am still confident of our chances.

The game with Shaktar will be at the back of Barca's minds,and their only aim Saturday will be to register another victory over a top-quality opponent.  Recent news suggests Messi will make the game, and if Pedro or Bojan do also, the loss of Xavi will be eased.

I do however wish that Xavi would cut out the silly yellow cards for dissent, as I am sure all of his bookings in the fast few seasons, if not his career, have come because of dissent.

With Abidal and Puyol missing, the central defense may be a weak link.  How can a Barca opponent best exploit that weakness?

First off it is hard to tell who will be Piqué's partner in the middle. Pep Guardiola has three options to tackle this problem. There is Argentine international Gabriel Milito, Sergio Busquets who could feature as a makeshift center-back or youngster Andreu Fontas.

If Guardiola opts for Milito, the easiest way to exploit the defense would be to take on  the Argentine, he hasn't been the same player as before his unfortunate injury and he has been guilty of giving away cheap goals.  Sergio Busquets has shown he can feature as a center-back but he leaves a huge hole in the middle of the pitch.

The last option is Fontas, who is still a bit of an unknown quantity in the Primera Division, nevertheless he is a solid defender and he could be Barca's future in the heart of defense.  The only thing Fontas lacks is experience.  Despite the fact that Piqué is an extremely talented defender, he doesn't have the commanding presence of Carles Puyol.

Even with all the missing pieces at the back, Villarreal shouldn't rely on the air game, because Barça has replacements of real quality.  The best bet would probably be to go on the ground and try to beat the offside trap.  Gabriel Milito is stil guilty of lapses in concentration and can't provide leadership skills that have been sorely missed ever since Puyol's injury.  Although Gerard Piqué is working hard to improve in this regard, he is yet to become the leader Captain Catalunya is.

You wrote that Barça doesn't need any summer transfers (in this article).  But if you could sign a Villarreal player this summer (please don't!!) who would it be, and why?

I stand by my argument, but I have huge respect for this Villarreal side.  To achieve as they have this season with former B-team manager Juan Carlos Garrido reminds me greatly of the success Barca had and are still enjoying after the promotion of Pep Guardiola.  Of course, each club has a different definition of success.

To pick one player is very difficult, but I think Mateo Musacchio edges it for me.  He may seem like an odd choice, but Barca are short of dependable centre-backs and Musacchio fits the bill perfectly.  He can play with the ball, has a great future ahead of him, and most importantly is at a high level now.  If he can get Champions League experience next season, he will really attract the attention of the "big" clubs.

I also admire Borja Valero greatly, but he is on loan from West Brom, so that ruled him out. (NB-technically he is on loan for this season, but it's understood he's already signed a contract with Villarreal for the next couple of years)

We didn't ask for a prediction, nor did they, but I'm going to stick my neck out and go for a 2-1 Villarreal victory.  Endavant Submari!!