Share All sharing options for: Hernán Pérez: The Paraguayan Dynamo

About 75 minutes into the 2nd leg of the Europa League quarterfinal against FC Twente, coach Juan Carlos Garrido substituted Giuseppe Rossi for a little-known Villarreal B player, #33 Hernán Pérez.

In the next few minutes he made the Villarreal faithful happy with his electric pace on the right flank. On one of his searing runs(at minute 5.20 of the video), he beats the Twente defence for pace and then draws a foul and a penalty from Bart Buysse inside the Twente penalty box.

That was my first Hernán Pérez moment. If a star wasn’t born that day, at least we realized we have someone special in our youth system. Someone with genuine pace and the skill and courage to nutmeg a defender or two. Much to my disappointment he didn’t feature much (if any at all) with the A team for the remainder of last season.

A brief summary from Wikipedia:

Hernán Arenio Pérez González hails from Asunción, Paraguay. Born on 25th February 1989, Hernán spent his formative years at youth clubs Ytororó and Cristóbal Colón in the city of Asunción before debuting for Tacuary the Paraguayan top division in 2007.

He made 24 appearances for Tacuary in which he scored a total of five goals. Hernán moved to Libertad, another club based in Asunción for the 2008-09 season. A serious injury to his right knee meant he played just once for Libertad before Villarreal signed him for a 5-year contract in the summer of 2009.

Hernán Pérez featured in the Villarreal B team between 2009 and 2011. He made 68 appearances for the mini submarine and scored five goals in total. The cameo at FC Twente was his first meaningful appearance for the A team.

Promotion to the Villarreal A team - 2011

Hernán got promoted to the senior Villarreal side after the departure of Santi Cazorla as well as his good showing for the Paraguayan national team in the Copa America 2011. Although he didn’t feature at the beginning of the season, the injury crisis at Villarreal meant Garrido had to dig deeper and play the likes of Hernán Pérez more than he would have anticipated.


His best games to date were the Champions League game against Manchester City in Manchester and last Sunday's La Liga game at Espanyol. He played exceptionally well in both games. In the Espanyol game, he pretty much took charge of the game in the 2nd half. Running up and down the right wing with dribbles, nutmegs and pace, he showed all the tools needed for someone to be a good winger. He created a couple of gilt-edged chances deep in the Espanyol area.

Hernán came in as a substitute in the league game against Zaragoza when Villarreal was trailing 1-2 at El Madrigal. His presence on the pitch changed the dynamic of the game. Pérez's powerful header made it 2-2 and the team looked more dangerous with him.

Hernán also had a couple of not-so-good games, something to be expected from a young player in his first season in the Spanish top-flight. It didn’t help that Villarreal was missing so many experienced starters due to injuries. But the presence of Hernán on the pitch generally coincided with the best passages of play by Villarreal this season.

Pérez is a right winger. He has a lot of pace, is a natural dribbler and a tenacious player. Even when he is not playing particularly well, it is hard to tackle the ball away from his feet. He is very good at tracking back in defense as well as pressing closely upfront. Hernán has the skill and courage to take on defenders. In his most recent game at Espanyol, he repeatedly beat the Espanyol's Spanish U21 fullback, Didac Vila by his pace and dribbles. He can hug the touchline as a natural winger or cut-in as an 'interior' that we are so accustomed to at Villarreal.

He is thriving in the new 4231 of Villarreal but I think he will be even more dangerous in a 2-striker formation. 4222 could become a 4213 in attack where Hernán can prevent opposition defenses from collapsing on the forwards by positioning himself on the edge of the right flank. He will also get better as he plays more with stalwarts of the team like Bruno, Borja, Cani et al. 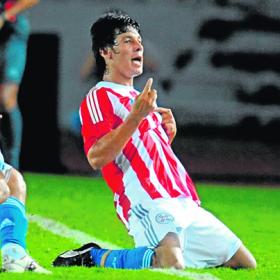 Hernán Pérez in the 'Albiroja' of Paraguay

Hernán was one of the best players of Paraguay at the South American Youth Championship in 2009 in Venezuela. He scored five goals in seven games to help Paraguay finish 2nd. This goal of his in the 1-0 win over Brazil ensured 2nd place in the round-robin tournament and guaranteed Paraguay a place in the 2011 U20 World cup.

Hernán debuted with the senior Paraguay national team in 2010 at the age of 21. He was a part of the Paraguayan squad that finished 2nd at the Copa America 2011. While Hernán didn’t score any goals at the Copa, his work rate was tremendous in the games he featured in, especially against Brazil in the quarterfinals. In coach Tata Martino's counterattack system Hernán was used mainly to do the dirty work on the wing. In a more expansive and attacking formation he will be a lot more dangerous.

Currently, Hernán is the only Villarreal player called-up for international duty for the CONMEBOL World Cup qualifiers. There is no doubt that he will play an increasingly significant role in the progress of Paraguay in the WC qualifiers.


After the Espanyol game, there has been some euphoria about Hernán Pérez's emergence. Some even mentioned him in the same breath as Santi Cazorla. While his emergence is one of the few bright spots for Villarreal so far this season, we should be careful not to get carried away. Hernán is a great talent. But he is still young. He will have his brilliant days and the not-so-good days. The most important thing is to not put unnecessary pressure on him by comparing him to the talismanic Santi Cazorla. While there are a few similarities in their styles of play, there are a lot more differences too.

Hernán needs an extended run of games to mature. The injury situation of the team and his good performances so far should ensure that he has a lot of playing time this season.

Exciting times about for Hernán Pérez. If he keeps his head, he has a great opportunity to be very successful at Villarreal as well as Paraguay.