Share All sharing options for: Levante dismantle the Yellow submarine at El Madrigal 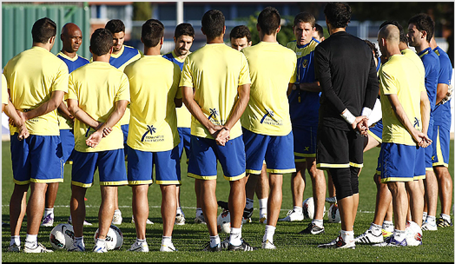 Coach Garrido at a training session. He has seen better days.

El Madrigal was buzzing with Villarreal fans singing and the noisy Levante fans, despite the 10pm kick-off.

Nobody imagined this would be easy. But almost everyone expected a positive reaction from the team after a good overall performance in Manchester.

This was supposed to our game at our home. We were supposed to set our stuttering league campaign on tracks.. The fans havent seen the team play a good 90 minutes all season. El Madrigal was expectant.

Instead, what unfolded was a nightmare that got worse as the game went on.

Villarreal started off ok, with some early possession but mostly in harmless areas. It was quite evident from the get go as to why Levante has such an impressive record. Very organized lines while defending and very intelligent and precise when they counter-attack. There were very early warning signs where Levante forced a desperate save off of Diego López.

The first goal wasn't very far behind the early warnings. It came around the 15min mark. A classic counter attacking move started by Nano near the Levante area. After a couple of passes and a clinical finish by JuanLu, it was 0-1. That familiar sinking feeling among the fans of Villarreal in the stadium and around the world, returned.

Our build-up play was too slow and predictable to make dents into the well organized defense of Levante. By now Villarreal had lost the initiative and Levante had a couple more dangerous counter-attacks. It seemed like we will ride out the storm and going into the hut with a goal down. Then came the mortal blow. Another counterattack that culminated in the second goal of JuanLu off of a neat pass by Arouna Kone.

The team looked lifeless when the halftime whistle was blown.

Garrido removed Marchena and sent in Marco Ruben to provide some help to Rossi up top. The backline was re-jigged with Bruno going on the left and Catalá moving into the center of the defence. This move made it worse if anything. The counterattacks continued. The third goal of Levante came before the 10 minute mark of the second half. Arouna Kone scored a deserved goal.

The problem with Villarreal defense was that they defend very passively. They let Levante get away with a free outlet pass that fueled their counterattacks too often.

Garrido made a baffling double switch after 0-3. Gerard Bordas and Mario Gaspar came on for Cani (one of the few bright spots in the first half) and the largely ineffectual Hernán Pérez. I would have expected him to throw in a Joselu or Camuñas to roll the dice. If you are losing 0-3 in the 60th minute at home, there isn't much more that could go wrong.

While there was an iota of improvement after the changes, Villarreal rarely threatened. A lot of passing up until the area of Levante and a cloud of dust (or a splash of mud in this case).

Rossi had a couple shots blocked and a shot saved off of the goal line by Levante defense. When things aren't going your way, they really don't go your way.

Congrats to Levante. They are the sole leaders of the Spanish Primera Division after 8 weeks. They have done it with the 2nd lowest budget of all teams in the league.

As a fan, I have never felt so disappointed this season. While I hoped for a win, I fully expected us to get a draw at least. What hurts most is not the result itself but the way in which we lost.

Real Madrid will be waiting for at the Bernabeu in less than 48 hours. If our team cannot handle the counterattacks of Koné, JuanLu and Valdo, God bless them against the likes of Cristiano, Kaka, Di Maria, Higuaín and Co.

This is a critical moment for our club. Fans are upset with the coach. We have noticed this trend on this site as well as among the twitteratti of Vila-real. The days of full unconditional support to the coach are long gone. But Sr. Roig has been very patient with Garrido valuing what he did in the 2009-10 season after the firing of Valverde.

Have the players given up on the coach?

Will Garrido resign or be fired after this result?

Can we keep our stars like Rossi and Borja Valero past the January transfer deadline?

These are all difficult questions to answer. I am sure we will find answers to these sooner than later. The thought of a coaching change should have surely passed through Sr. Roig's mind as he watched the team that he cares so much for, implode at home.

As the old adage, When it rains, it pours. and right now it is pouring literally and figuratively in Vila-real.

Before I sign-off thanks to Allen for the intro and I am excited to be onboard. It would have been nicer to start off writing about a win!