Mateo Musacchio for the B?

Share All sharing options for: Mateo Musacchio for the B?

Juan Carlos Garrido is still looking for another centre back to make up his squad for the forthcoming season. It seems that his ideal candidate would be 19 year old Mateo Musacchio. The young Argentine is currently on the books of River Plate and we are very interested in bringing him to Spain. He made his first team debut aged just 16 and he has also been involved in the Argentine youth setup. 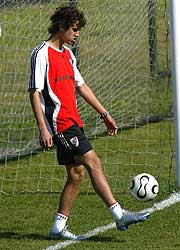 For the moment no price has been mentioned but according to the article (link) he has called his former team mate Robert Flores to ask him what things are like in Vila-real. Flores gave him a good recommendation. His current coach Nestor Gorosito has also acknowledged the possibility of Mateo playing in the Segunda next season. Importantly he already holds an Italian passport which means he can go straight into the B squad. The two non EU places having been taken by Montero and Renan. Hopefully the deal can go through in the next few days, he would be a good replacement for Fuentes in the next few seasons leaving us with 4 solid centre backs.

On the subject on non EU players, Thiago Dutra has had his contract cancelled, he returned to Brazil without permission from the club. Such is the risk of taking youngsters out of their comfort zone and it's unfortunate for the young lad. Hopefully he does well in the future