What a victory! For the first time this year, Villarreal picked up three points on the road, and they were well-deserved. Atleti managed a couple of through balls that found our defense wanting, but otherwise, the match was Villarreal's from the start. If Escudero did not find Joseba Llorente in the 90th minute, and if Llorente did not sacrifice his head between two defenders to punch that cross home, Villarreal would have walked away from that match feeling that they gave away two points, rather than that they picked up one.

A few of us got together at Summers Restaurant in Arlington, Virginia to catch the match, and had a good time. Villarreal was well-represented among all the American football fans that were in attendance, and I know we got a few funny looks with the 90th-minute celebration of Llorente's goal. We'll be planning more of these in the future, and hopefully, can do some similar events in New York and a few other places. 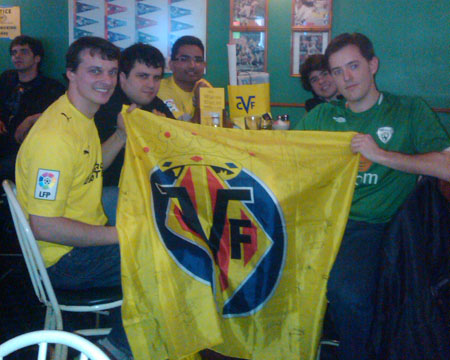