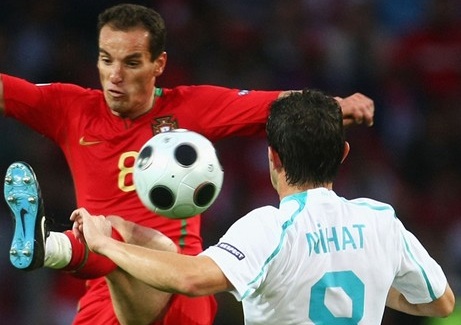 I am going to try and keep updates here on Villarreal players' performances over the next couple of weeks in Euro 2008. It is going to be somewhat limited, since most of the games will be on while I am at work. I will be able to watch one match a day once I get home, but might miss a good bit of matches in which Villarreal players line up.

There are four Villarrealean players, only lining up on two teams: Spain and Turkey. The Turkish component is obviously Nihat (see below for yesterday's match). From Spain, we have Capdevila, Cazorla, and Senna.

Nihat started the competition off in the Portugal-Turkey match. I was only able to see the first half, so I cannot really give a full report on his play. The commentator on the previous post obviously was not impressed. ;)

From what I saw, he was fairly nonexistent during the first 45. Not all of that was his fault, but he could have been much more involved in creating chances. Turkey was able to keep some possession in midfield, but Nihat did not take much active participation in moving forward, leaving most of that to the midfielders.

I cannot say much about his second-half play. So I will rely on the final analysis by goal.com:

Nihat: 6.5 - A decent performance and he cannot be faulted for his work rate. Some good set-pieces, but was physically out of his depth against the likes of Pepe and Carvalho.

So, not the best match. Probably the toughest match he will face in the group, though, so we will have to wait and see if he can turn things around next match.