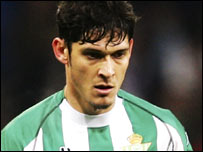 Apologies for the terrible headline but it was the best I could come up with. I thought I'd give a bit of information on the latest player that we have been linked to Real Betis' Luis Eduardo Schmidt 'Edu'. The Brazilian striker has had a very impressive season for Betis scoring several crucial goals and including a virtuoso performance against Barca. Capable of playing as the lone striker or dropping in behind, Edu scored 12 goals in the 2007/08 season and also notched up 5 assists.
The reason we have been linked with the enigmatic Brazilian is the fact that he is yet to be offered a new contract by Betis supremo De Lopera. Earlier in the season he stated that he was quite happy at Betis but the failure of a new contract to materialize has forced him to consider his options. If we were to sign Edu it would probably signal the end of Guille's time at El Madrigal, Pellegrini has made the point that he wants to keep it at a 22/23 man squad so having 5 strikers is not on the cards. A strike force of Nihat,Rossi,Edu and Llorente next season would be quite formidable and would leave us well covered for all competitions.