Share All sharing options for: Diego Valeri, A future submariner? 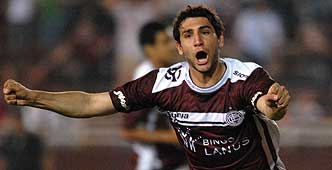 Following José Manuel Llaneza's sojourn to Argentina several rumours regarding transfers have surfaced. The most intriguing of these is that of Lanus' Diego Valeri. The 21 year old first broke into the first team at the age of 17 and is now an established starter. He is a creative midfielder, I would describe him as a cross between Riquelme and Marcos Senna, he has great passing ability and some nice skill but he is also a good worker who throws in the odd crunching tackle,I think he would fit in well in the double pivot position Pellegrini has employed this season.However if we did move for him I think we could expect some competition, Juventus supposedly have had an 8 million bid turned down. However Juve don't have the negotiating power that we have and I would not be surprised if we worked a deal out.The signs are encouraging, we are out looking at top players and we are showing that we want to be right up at the top of the table this time next season aswell. image credit espndeportes.espn.go.com