Marca is reporting Villarreal are looking at Palermo's Brazilian striker Amauri, who would apparently go for well over 20m euros, as the Palermo president has already turned down a 22m euro bid. 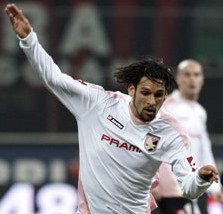 Apparently Barca are also in the running. Bringing another striker in, after adding Ruben, would seem to be the death knell for Jon Dahl Tomasson's time at El Madrigal, and possibly Guille Franco, if Villarreal can keep Rossi in yellow next year.